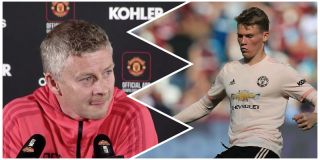 Ole Gunnar Solskjaer explained how Scott McTominay missed the Manchester derby despite undergoing a late fitness test before the match.

The Scotland midfielder has had plenty of minutes to prove himself under Solskjaer after showing in games against Barcelona and away to Paris Saint-Germain that he can rise to the occasion.

McTominay has what it takes to become a trusted player under Solskjaer, even if he’s not a regular in the team every week.

Because when United get their business done this summer, McTominay should be no more than a squad player, but one pushing for a place and keeping other players on their toes.

You get the impression he buzzes off playing for United and he doesn’t shy away from games.

Anyhow, Solskajer explained his absence from the defeat against City on Wednesday and hinted that he could feature against Chelsea at the weekend.

“Scott failed a fitness test on Wednesday morning, so he’s going to have another one today (Friday) probably to see if he’s available,” the manager told MUTV, as quoted by the Manchester Evening News.

He doesn’t go into much detail about what sort of injury McTominay suffered, which may suggest it’s nothing serious and that they expect him back soon.

With three games left to play this season, the Scotland international will be eager to get on the pitch before it all ends for another summer.