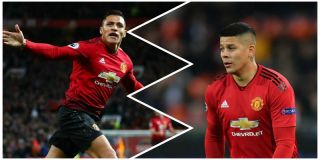 Manchester United have reportedly begun plans to let go a number of stars this summer such as Alexis Sanchez and Marcos Rojo.

Whatever about Rojo, the Argentine didn’t have much of a reputation prior to joining United, but Alexis Sanchez has been a complete disappointment.

But the club has struggled with selling their players due to the high wages they currently steal, and that is likely to be a big problem when negotiating with clubs for Sanchez.

His incredibly high salary will see most interested parties turned off.

According to The Sun, the Reds have created an emergency fund to pay off several stars to help them find new homes.

The last thing Ole Gunnar Solskjaer needs now is passengers because no matter how talented the dressing room, questionable attitudes will go against anything positive being done.

Neither player would be seen as a loss at this stage. It’s time to move Rojo on considering he can’t get ahead of Phil Jones and Chris Smalling in the defensive pecking order.

United need to sign a new centre-back this summer, so keeping hold of Rojo would be pointless. He’s received interest from other Premier League clubs in the past.