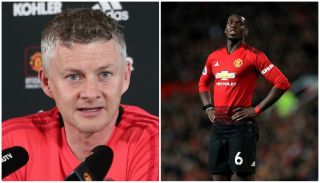 Ole Gunnar Solskjaer could not give a definite answer to a question on Paul Pogba’s future.

The boss was asked if the French midfield will still be playing at United next season.

Solskjaer doesn’t hide his admiration for Pogba, a player he’s worked with in the Academy many moons ago. He will hope the former Juventus star remains at Old Trafford and plays a part in the rebuilding job set to kick-start under Solskjaer this summer.

NEXT: De Gea receives backing from Solskjaer despite shocking from

However, United have had a bit of a bad patch lately and we need star players like Pogba to step up to the mark. We know what the players can do, we know we can win and get results… It’s a matter of finding our rhythm again.

The Reds need to keep focused but it’s hard when so many players at the club have uncertain futures.

Pogba is one of those, hence why Solskjaer had to answer the question at this morning’s press conference.

“You can’t guarantee anything in football but yes I think Paul’s gonna be here, he’s very determined to succeed at Man United,” said Solskjaer, as quoted by the Manchester Evening News.

“That’s just the standards he sets because when he’s creating chances, scoring goals, doing loads of work, that’s just media, supporters, everyone looks to Paul, could you have done better, Paul’s done fantastic for us, he’s a human being as well and we’re all the same, we want him to do well, he’s a leader in that dressing room and on the pitch for us and back to if I can guarantee, I would say yes, I can guarantee but in life you can never but he will be here as far as I’m concerned.

“I think you know as well the world has changed so you don’t have a Robbo, a Keane or a Steve Bruce in our dressing room, we’re all different. We have a squad full of talented players and leadership is so many different things, I loved playing under Roy Keane anyway, everyone here spoke about Robbo but we’re all different now, society is different, I don’t lead the way Sir Alex did, Van Gaal, Mourinho, we’re all different leaders.”

Ole Gunnar Solskjaer says he expects Paul Pogba to stay at the club, despite @realmadrid's confidence of signing the midfielder: https://t.co/wsrrzHEP3g pic.twitter.com/yVd8WncRiJ