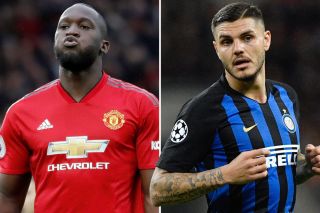 Belgium international Lukaku has struggled all season to replicate his form of previous campaigns. After a delayed return from the World Cup, the striker appeared to have bulked up excessively and his performances were strongly criticised.

The 25-year-old has openly shown his desire to one day play in Serie A, as per Goal, and that could open the door to one of the summer’s biggest transfer trade deals because Inter Milan are one of the clubs linked with a move for the former Everton forward.

The Nerazzurri could be looking to find a replacement for Argentina striker Mauro Icari, who has been exiled from the squad for months after a contract standoff.

Di Marzio believes that Icardi and Lukaku could be involved in a swap deal this summer.

“Because of the dynamics after what happened this year between Inter and its former captain, it leaves this possibility open,” Di Marzio said, as per The Express.

“Now, all the clubs understand that Mauro is easier to reach than in the past as they can spend less than the €110m release clause.

“I believe that a transfer can be done but only through an exchange.

“With Napoli, it is complicated given the wage that Icardi is making.

“The same thing applies with Edinson Cavani but it is the other way around as Inter wouldn’t be able to afford his €12m per year in wages.

“As of right now, the only concrete option is to do an exchange and I would say wit Manchester United for Lukaku.”

However, this is a contradiction to what Icardi’s wife and agent, Wanda Icardi, has said.

She argued: “He’s still scoring goals. He keeps moving forward because he is the strongest one in his family.

“He’s calmer now. He hugs all his teammates because he has always had a great relationship with everyone.

“We will surely stay in Italy next year.”

United will need to sign another striker if Lukaku is sold.

While Marcus Rashford is very good for a 21-year-old, he’s not a 20+ goal per season striker yet. How can United go into a new campaign without a recognised striker who has shown the ability to score that amount in one season? Not team will challenge for the league title without one.

Stephen Howson, a regular on Full Time DEVILS, gives his verdict on the Icardi story below.