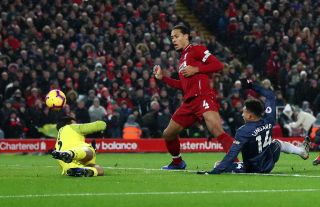 The Netherlands centre-back joined Liverpool in January 2018 but United made a late phone call to see if he was still available, but he wasn’t. It was too late. Van Dijk had already completed his medical on Merseyside.

Why did United leave it so late?

While it’s only been a year, our defence is no better. Former manager José Mourinho warned that would be the case last summer, yet Ed Woodward refused to back the man he sacked in December.

Had United signed Van Dijk instead of Liverpool, you can only imagine how different things would be? He single-handedly transformed Liverpool’s defence midway through last season, though they played the remainder of the season without a recognised goalkeeper, even in the Champions League final.

Arsenal, Chelsea and City also did they bit of sniffing around Van Dijk but only Liverpool have seen the benefits of having the best centre-back in the Premier League. That’s what he is – this season at least – and I don’t enjoy admitting that about a Liverpool player.

Dickinson mentions a remarkable stat in his piece about no one dribbling past Van Dijk this season in one-on-ones. Okay, he faces Lionel Messi next week in the first leg of the Champions League semi-final, but that’s different gravy. Almost hard to believe for any defender.

Moreover, this adds to the frustration surrounding United’s recruitment and why we’ve slipped so far behind – 6 years without a league title.

Here’s a snippet that will have you in disbelief:

“Van Gaal told a Dutch newspaper that Van Dijk ‘didn’t defend forward’, failing to press the ball, and it seems that many other managers had reservations, given that the defender joined Celtic for only £2.7 million from Groningen in 2013.”

A £13 million transfer down to Southampton followed as a stepping stone to greater things for the Dutchman. He’s now played in a Champions League final for Liverpool and looks likely to be pipped to the title by Manchester City, with just three games remaining.

To become a top defender in the history books, Van Dijk needs honours. We hope he wins nothing!

United will end the season not knowing how the defence will look next season. Victor Lindelof and Luke Shaw are two who are probably safe for now, but Ole Gunnar Solskjaer should be aiming to sign a right-back and centre-back.

Names such as Toby Alderweireld, Kalidou Koulibaly and Raphael Varane continue to do the rounds. Just mere speculation for now.