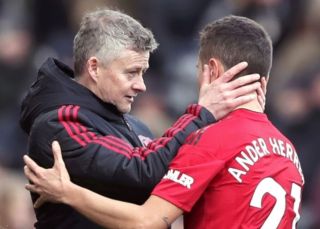 Ole Gunnar Solskjaer may have another option to select from in midfield on Sunday when Manchester United host Chelsea in the Premier League.

The manager revealed in his press conference on Friday morning that Ander Herrera has returned to training and could be in contention to feature against the Blues.

Herrera has been out with a thigh injury for the past few weeks, although there has been plenty of talk about a summer exit, with Paris Saint-Germain said to have a contract agreed in advance, as per Bleacher Report.

For a player who lived up his Top Red credentials, it came as a surprise that he would jump ship for more money elsewhere, while United have already offered him an improved deal.

But that’s football and United must only stick with players who want to be at the club, not passengers or people not committed to the cause.

Solskjaer gave an update on Herrera, as quoted by the Manchester Evening News: “I would think so (will play for United again) yeah. Ander’s been training, enthusiastic and probably be involved on Sunday, can’t guarantee but he’s trained the last two days.”

The more options Solskjaer has the better, but he should only play those he thinks are going to put in a shift.

Time will tell if Herrera’s head is in the right place.