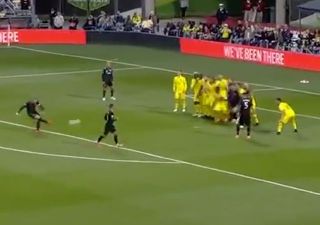 Wayne Rooney has shown he still has what it takes by scoring a brilliant free-kick for DC United from the edge of the box.

Rooney’s finish came 27 minutes in the game, so his teammates would have had to hold on to their lead for long enough, possibly making it an edgy affair.

But it’s good to see Rooney still scoring goals. A United legend ripping it up over in the states.

DC United are top of the Eastern Conference after winning five of their nine games this season. During that period, Rooney played seven games, scoring four goals and creating two assists.

Rooney will be wishing his former teammate Ole Gunnar Solskjaer the best as United manager.

Who knows, they might cross paths in a coaching capacity?

See the video below.