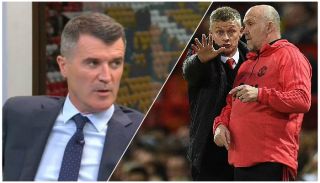 Manchester United have lost seven of their last nine games, including a 2-0 Manchester derby defeat on Wednesday night.

Nevertheless, Roy Keane does not feel sorry for Ole Gunnar Solskjaer, who has seen his players drastically drop in form since knocking Paris Saint-Germain out of the Champions League.

The Irishman insists that his former teammate should be given time and new players to build his own team as more problems at United are exposed.

“Feel sorry for Ole? No. He’s in a great position. Manager of Man United,” Keane said on Sky Sports (quoted by the Manchester Evening News), where he joined the panel for analysis of the Manchester derby. “It’s a big job for Ole. The honeymoon period is over. He knew there would be some problems, but now he’s gone into it and had a good look, he’ll have realised it’s bigger than what he thought.

“He’s a brilliant guy and I wish him well. United have tried other managers that haven’t really worked out, lost patience, they’ve got to back Ole now and give him the players he wants in the summer. He needs to turn these problems around.”

With Arsenal losing 3-1 against Wolves on the same night, United lost out on a chance to make ground on a top four finish. Though we were underdogs from the off and the gulf in class was clear to see.

The lads didn’t perform too poorly against City in the derby, not by their standards anyway.

We saw a sorry display from the Reds on Sunday, losing 4-0 against Everton, but Solskjaer must now get a response from his players and find out who he wants to work within the future.

United take on Chelsea in the Premier League this weekend. Solskjaer’s men must win if they’ve any chance of securing a Champions League spot.

Check out the league table below.