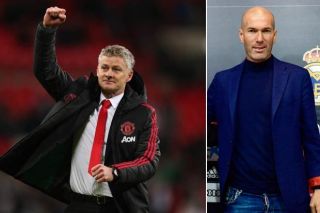 The former Manchester City winger has been strongly linked with a move to Old Trafford, as noted by The Independent, with suggestions that Sancho is their transfer priority in the next window.

It comes amid a blip that could see United lose out on a Champions League spot, with Wednesday night’s defeat against Manchester City to latest game the Reds have failed to score in.

Although Sancho is a player seemingly capable of coming in and changing the fact United have struggled in front of goal, the 19-year-old has had a tremendous breakthrough season and will believe he deserves to be playing Champions League football year after year.

This season, the England international has scored 12 goals and 18 assists in 39 games for the Bundesliga outfit.

Goal Italy notes that reports in Germany suggest Zidane wants Sancho at the Bernabeu next season, but Dortmund are now said to be demanding €180 million for their prized asset.

Like Solskjaer, Zidane has a task at hand to rebuild the squad at his current club. He too was hired to get Real Madrid back on track, so it will be intriguing to see how they manage the process compared to us.

Having failed to cope without Cristiano Ronaldo this term, Real Madrid look set to spend big with names such as Eden Hazard and Paul Pogba constantly linked with summer moves.

It could also mean Los Blancos will try to sign Sancho, though I think United’s stance could be made difficult should we miss out on a top four finish.