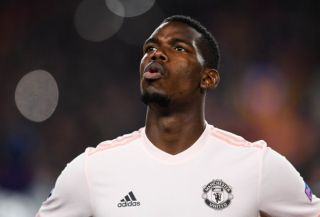 Paul Pogba is the only non-Liverpool or Manchester City player in the PFA team of the season announced today.

The Manchester United midfielder, who has been criticised throughout the season for his inconsistent displays, was voted by his fellow Premier League players.

NEXT: Real Madrid to gazump Man Utd for €180m transfer target, both clubs trying to rebuild

It’s telling that the team of the season is full of Liverpool and City players. The other clubs in the top six have some work to do if they plan on catching up next season, though for now, we have to settle for a two-horse race for the title.

Despite Pogba’s form dropping off, the World Cup winner has recorded some healthy numbers this season, but many will still find a way to disagree with his inclusion. It just shows that at his best Pogba would walk into more teams like this.

He was dropped by José Mourinho earlier in the season but found a new lease of life after Ole Gunnar Solskjaer came in. However, we’re starting to see his form nosedive again and Roy Keane stuck the boot in during Sky Sports’ Manchester derby coverage.

After Sky Sports showed an interview with Pogba, Keane said, as quoted by The Times: “I don’t think he even believes a word he’s saying. He’s a big problem. My eyes don’t lie. He plays for himself.

“The guy is a talented boy but the number of times I have seen him in games and he is not sprinting back or running back. He is a problem.”

Liverpool’s Van Dijk is expected to be named PFA player of the year.