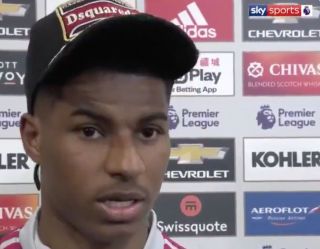 Marcus Rashford has claimed Manchester United have mentality problems and that players have not had a willingness to run for the team after the derby defeat to Man City.

Rashford was clearly unhappy with his side’s performance after Ole Gunnar Solskjaer’s side’s seventh defeat in nine games in all competitions.

United improved from Sunday’s woeful defeat at Everton, but were still well off the pace against Pep Guardiola’s City side who now go top of the Premier League.

Second-half strikes from Bernardo Silva and David De Gea gave City all three points, with United failing to create many clear-cut chances. David De Gea was yet again at fault for City’s second, unable to keep out Leroy Sane’s low effort with his feet.

“Today we didn’t play like Manchester United. It’s not right. The bare minimum is to work hard and give all for the badge, the supporters, the club and yourself,” Rashford told Sky Sports via the BBC.

“It has been a tough road to get to where we are, to get there and not be putting up the same performances as we were in January is disappointing. We know what’s been going wrong, it’s mentality and willingness to run for your team.

“Forget the league and top four, you don’t lose this game. It’s that simple as a Manchester United fan. We never call each other out but we have to be real with each other. It’s a matter of trying to improve each other.

“It’s more getting back used to doing it on the pitch. They [the supporters] know we can do it. Forget the top four and the Champions League. We have to get to the bottom of it and start playing like Manchester United for ourselves.

The Reds now have to pick themselves up once again for Sunday’s must-win game against top four rivals Chelsea. Another defeat would almost certainly end United’s hopes for Champions League qualification. Results have gone United’s way in recent weeks, with Arsenal failing to win again tonight, but the Reds must improve if they are to capitalise and win their remaining three games.

👊 – "Forget the top four, forget the @ChampionsLeague, we have to play like @ManUtd."

An honest assessment of the last few weeks from @MarcusRashford after tonight's loss to @ManCity. 🔴🔵