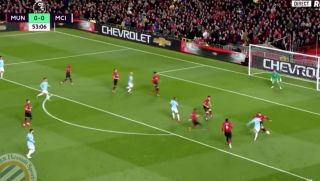 The blues, who need to win to keep their hand on the Premier League title, opened the scoring in the second-half thanks to Bernardo Silva.

Formerly of AS Monaco, the Portuguese winger has been excellent this season, so it’s been no surprise to see him as a threat throughout the game.

United did well to keep City out in the first-half but Pep Guardiola’s men were bound to keep knocking on the door.

Silva gets the ball on the right before turning in quickly and catching Luke Shaw off guard. The United left-back didn’t look like he wanted to challenge the City attacker, who put his effort past David de Gea at his near post.