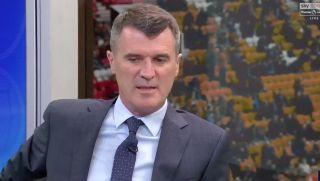 Roy Keane went on a rant about the current squad in the Sky Sports studio.

The Irishman is working for Sky Sports as part of their Manchester derby coverage.

He had some strong words for French midfielder Paul Pogba.

Prior to kick off, Keane revealed that he “wouldn’t believe a word that Paul Pogba says” because his words have “no meaning”.

Strong from the former United captain, but everyone is getting frustrated with United’s stars who continue to underperform.

Keane reacted to a clip they showed of an interview with Pogba as he explained what United need to do in order to bounce back from the 4-0 defeat against Everton on Sunday.

In the video below, Pogba is described as a “big problem” for United. Keane joked that Pogba and his United teammates “threw their hair gel at each other” after the France international revealed things go ‘heated’ in the dressing room.

Roy Keane did NOT hold back when asked for his opinion on Paul Pogba 😡 pic.twitter.com/GuaGUDqhjF