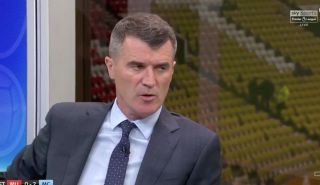 Manchester United were well-beaten by a far superior Manchester City side at Old Trafford tonight.

United were up for the fight in the opening stages, but the gulf in class became evident as the game went on with goals from Bernardo Silva and Leroy Sane taking City back top of the Premier League.

An ex-Man Utd player who was always up for the fight is Roy Keane, but he was not convinced by Ole Gunnar Solskjaer’s side’s efforts this evening.

Keane claimed it was an ‘easy night’ for Man City, and suggested United failed to close down Bernando Silva for City’s opener. Keane then accused Fred, who was clumsy on the ball throughout the game, of ‘cheating’ for City’s second after not giving his all in tracking his man before Leroy Sane struck the decisive goal.

Some strong words from Keane who, like the rest of us, is not happy with the state of affairs at Old Trafford.

"The City players couldn't believe how easy it was tonight."