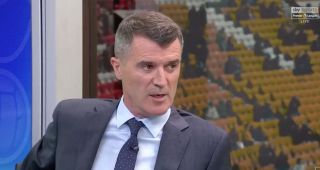 Prior to the game, the Irishman analysed the job at hand for Ole Gunnar Solskjaer and warned his ex-teammate about his playing downing tools.

That would suggest they did that under José Mourinho, who Keane uses as his prime example.

Mourinho was sacked back in December which prompted a rejuvenation within the squad following Solskjaer’s arrival.

But now the players are showing the same negative signs under Solskjaer and Keane didn’t wait to put the boot in.

It’s a bad sign when it comes to this at a club like United. The dressing room isn’t far off poison if this is really happening again.

See the video below for Keane’s take on Solskjaer’s job at hand.

“These are the same players that threw Mourinho under the bus and they’ll do exactly the same to Ole.” 😳