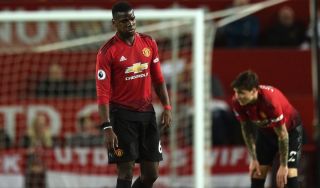 The gulf in class was clear to see. Manchester United are miles behind Manchester City.

To credit Ole Gunnar Solskjaer’s men, United played well in the first half and it looked like City would have a game on their hands after the interval.

That wasn’t the case as United tired throughout the match, most notably after the 30 minute mark.

And, thankfully, Arsenal lost 3-1 against Wolves so our top four hopes are still alive… Just about!

Here’s how United fans reacted to the result

Things are going to get ugly if we don’t beat Chelsea.

For all the negativity they get, there is absolutely no chance Real Madrid’s fans would let their club act in the way Manchester United have.

I would have no issues whatsoever if all 25 of Manchester United’s squad was transfer listed in May. That’s where we are at as a club now. The players are woefully short of where this famous club deserves to be. Only one family to blame for this mess: The Glazers. #MUFC

If the idea is that we can’t sign more than 4 players in a window then we ain’t being competitive for a very long time. This team is absolutely rotten.

United are a bit like Frankenstein’s monster. Players bought under different managers, playing in positions they don’t usually play against England’s best football team. No core, no clear plan or vision and nothing remotely close to looking like a team that can challenge.

Sick of these players. Had enough of them. Top 4 gone. Just play the kids next 3 games because we can’t stomach any more!

Frustrating result tonight. We matched them then gave away soft goals. Didn’t look like scoring ever though, which is even worse. More effort than against Everton, but then that’s not hard is it. Heads went down at 2-0.