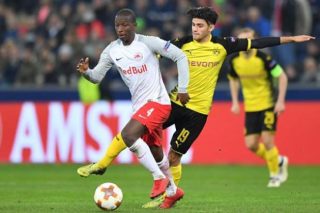 Ole Gunnar Solsjaer will start his rebuild of this Manchester United side in the summer. As the manager, he must get the majority of his signings right in order to succeed and one player from the Bundesliga has made it clear he wants to join the club.

The squad needs improvement in many areas if we are to challenge the likes of Man City and Liverpool next season, which already feels like a big ask before any business gets done.

Solskjaer will look at the current dressing room and figure he doesn’t only need better players, but players with better attitudes. Having the right attitude and mental capability is key for United players.

And failure in the post-Sir Alex Ferguson years stems from it.

The manager has made it clear he wants players who he can shape the United DNA around. Perhaps one way to do that would be to bring in some players who dream of playing for the mighty Reds, as long as they’re good enough.

RB Leipzig midfielder Amadou Haidara gave an interview to SportBild. And when asked his ‘biggest dream’, the 21-year-old said:

“I like Manchester United very much and watch as many games as possible. I dream of playing there. But at the moment I am very satisfied with RB Leipzig. Our big goal is to get into the Champions League.”

Well, if he was to join United, at least we’re getting a player who has experience fighting for Champions League football. That’s been our priority for six years now.