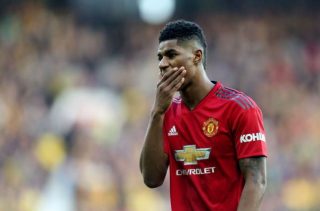 It has been revealed in an article by The Independent that one Manchester United player believes Marcus Rashford is not as humble as he used to be.

That would suggest the spotlight has gone to his head and that won’t be a surprise to anyone given his performances of late.

“One teammate has complained to friends about how Rashford is not quite the humble figure he used to be.”

Rashford’s form has dropped off significantly over the past month, despite the England international showing some of his best form yet after Ole Gunnar Solskjaer initially took the role as interim manager.

For a Manchester lad who came through the club’s academy, Rashford doesn’t seem to be putting in the effort he should be. We don’t know if he’s carrying a knock but something isn’t right.

There’s also the contract situation, with the Daily Mail claiming Rashford is stalling over a new deal because he’s demanding £200,000-per-week.

Rashford must be oblivious to the fact his performances have been well below par.