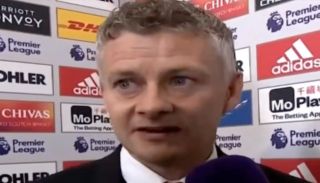 Second-half strikes from Bernardo Silva and Leroy Sane gave City all three points, who now go ahead of Liverpool in the league.

The Reds started brightly and, as expected, showed far more fight and enthusiasm for the cause than on Sunday, but still fell well short of their opponents. United created few clear chances in the game; the biggest came to Jesse Lingard who somehow completely fluffed his attempt to equalise from close-range.

Bernardo Silva’s opener was a smart finish, beating David De Gea low at his near post, but the Spaniard made another howler for City’s second after failing to deal with Sane’s shot directed towards him. Serious questions will now be asked of De Gea who has committed several woeful mistakes in recent months, amid uncertainty over his future.

NEXT:(Video) Pundit raises some serious doubts about Solskjaer’s ability as a manager

“We got a reaction and in the end we were beaten by a better team. But we got a reaction from fans and players and had a go. You can see the work-rate was there, it wasn’t good enough,” Solskjaer told Sky Sports via the BBC.

“There is a difference in quality. That is why they are top and we are where we are. They have set the standard. Living in Manchester we cannot be happy with that. It is up to us to close that gap and overtake them.

“Today you can’t say that any of them didn’t run. You could see clearly an intent and focus. We just need to keep working on it.

“David [De Gea] made some terrific saves as well today. It is every day work for everyone. He has high standards. When we are having a time like this we need to stick together, batten the hatches down and keep working. We have to come back fighting on Sunday.”

All is still not lost for Solskjaer, who will take some encouragement from an improved performance tonight. Sunday’s game against Chelsea is a must-win game to maintain Champions League hopes, with United dealt another favour by top four rivals Arsenal who were defeated yet again, this time by Wolves at Molineux.

A silver-lining to yet another defeat for United fans is that Guardiola’s side are back in the driving seat for the Premier League with just three games remaining, a lesser of two evils with Liverpool taking them to the wire.

However, tonight’s game showed just how far Solskjaer’s side are behind their city rivals in all aspects, with such a glaring gulf in class. The Norwegian has a serious rebuilding job on his hands if United are to compete domestically again in the near future.