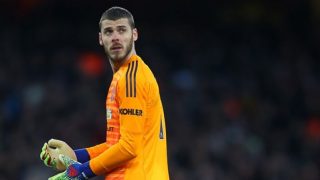 As reported by the Metro, Manchester United have identified Jan Oblak as the replacement for David de Gea.

The club doesn’t sound any closer to agreeing on a deal with De Gea and his representatives, while The Guardian claims the goalkeeper is one of three United stars who will consider his future if the team fails to secure a Champions League spot.

Oblak, recognised as another one of the best goalkeepers in world football, is one of few options out there who wouldn’t be considered a downgrade from De Gea.

The Spain No.1 has been subject to criticism ever since the World Cup last summer, with United now starting to see worrying signs between the posts.

It is claimed in the story that United would be able to command a transfer fee of approximately £90m for De Gea and use all of that and more to sign Oblak in a £100m-plus deal.

However, it is worth noting that Oblak only recently penned a contract extension until 2023 at Atletico Madrid.

Turning down a club like United is a completely different story, regardless of our position at the moment.

Would you sell De Gea and sign Oblak this summer?