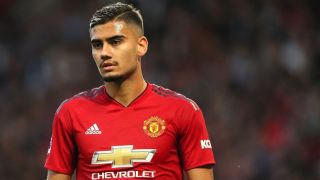 Ole Gunnar Solskjaer has opted for a few surprise names in his starting eleven ahead of the Manchester derby, with Matteo Darmian getting an opportunity to show his worth at right-back.

Solskjaer said all players would be given a chance when he came in as caretaker manager, back in December, but Darmian still looks miles away from being a regular in the team.

Tonight he gets a chance against a title-chasing Manchester City side. You could say we’re fearful about how he will respond to the task at hand.

However, the rest of United’s defence will come as no surprise. David de Gea keeps his spot between the sticks, Victor Lindelof is partnered by Chris Smalling, and Luke Shaw returns from suspension at left-back.

But Ashley Young starts too, so there could be a slight alteration to United’s shape defensively.

After Sunday’s humiliation against Everton, Solskjaer has dropped a few of his midfielders in favour of Andreas Pereira, the Brazilian we’ve not seen in a while. This is a good chance for him to raise his steaks at United ahead of next season. Pereira will be joined in midfield by Paul Pogba and Fred; let’s hope the former has one of his better games and guides the Reds to victory.

Marcus Rashford will lead the line for United, with Jesse Lingard expected to ask as a support act. These two lads have been poor lately, offering very little, and tonight’s game should be seen as an opportunity to redeem themselves.

See the full line-up below, as tweeted by @ManUtd.

And in the red corner… 🔴#MUFC #MUNMCI