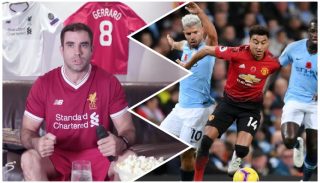 As we all know, Liverpool fans will have a keen eye on the Manchester derby on Wednesday evening.

They’re going for the title and hardly want Manchester City overtake them in first by winning their game in hand over United.

NEXT: Ole Gunnar Solskjaer insists he is the right man to lead Man Utd

If City win their remaining four Premier League games, they claim the title – which means Liverpool could finish the campaign on 97 points yet still come second. That just goes to show you the level of consistency required to challenge for the Premier League this season.

South Africa TV broadcaster SuperSport have done a pretty funny promo for the match, which features a Liverpool fan (adult male – wearing a full kit) doing his best not to throw up as he sings ‘Glory, glory Man United’.

It’s cringeworthy and exaggerated, but there are some oddballs out there who may behave in such a way.

What a frightening thought!

Super Sport have released this ad showing how Liverpool fans will be forced to cheer for their eternal rivals Man United in the Manchester Derby on Wednesday to help them win the league. Nicely done @SuperSportTV. 😅👏🏻 pic.twitter.com/18mquE9Yxd