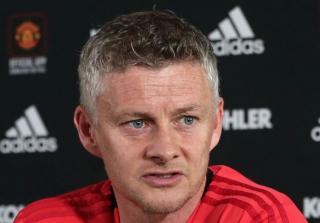 Ole Gunnar Solskjaer has warned his Manchester United players to be ready for Manchester City’s tactical fouling in the derby on Wednesday night.

In a game City are bound to dominate possession in, United will need to be clinical on the counter-attack. Solskjaer expects City to use fouls as a method to prevent breakaway attacks.

NEXT: Ole Gunnar Solskjaer insists he is the right man to lead Man Utd

You see City do this every week and they’re good at it (due to the fact they rarely get penalised about it), so it’s important that United players are clued in and know what to expect.

“That’s the best game we could ask for,” Solskjaer said about the derby, as quoted by the Manchester Evening News. “With players hurt, as they definitely were, we had a meeting after the game and you could see all the players were definitely, definitely disappointed but really, really hurt by that performance.

“And City game is the perfect one, there’s no hiding place on the pitch, I’ve said it so many times, and the fans will back you whatever result there will be as long as you give that effort, against a City side that is very good.

“We’ve gotta be ready for the press, for their pressing, they’ve got quality on the ball, so we gotta defend well, when we win it we’ve gotta be ready for your aggression. Because they will snap at your ankles and heels and kick you, they are not gonna allow us easy counter-attacking because there will be fouls, absolutely no doubt about it.

“When you watch them games they commit so many players forward and they’ll be stopping us as high as they can.”

United go into the derby on the back of an embarrassing display against Everton, losing 4-0 at Goodison Park on Sunday.

Solskjaer apologised to the fans after the match after what as the worst performance I’d seen from a United side.

The players must shoulder most of the responsibility for what happened, though. And they must respond on Wednesday night.

I know, we don’t want Liverpool winning the title, but wanting United to lose a game just feels weird.

They must at least show a bit of passion. That was non-existent on Sunday afternoon.