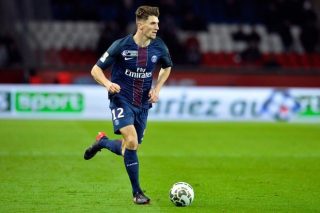 Manchester United are considering an approach for PSG full-back Thomas Meunier as they look to solve their problems at right-back.

The Independent’s Miguel Delaney reports that Meunier, 27, is keen on a move away from the French giants this summer with just 14 months remaining on the Belgian’s contract.

Meunier is unhappy with his amount of first-team football under Thomas Tuchel, so a move for the player would likely only possible if assurances were made over the Belgian’s playing time. ESPN have since ran an article on why the PSG fans started booing Meuiner and more…

The report states that Everton have also registered an interest in the player who has made no secret his ambitions to play in the Premier League.

“I’ve never hidden [my desire to move to the Premier League] and there is interest, but there’s been interest from everywhere, including China and the Middle East,” Meunier told Belgian newspaper l’Avenir.

Wann-Bisakka has enjoyed an excellent season at Selhurst Park and can count himself unlucky not to be nominated for the PFA Young Player of the Year award.

Trippier, meanwhile, has been indifferent form this season and fans are unsure whether the signing 28-year-old would represent good business after a report by Gianluca Di Marzio stated United are competing with Napoli for the England international.