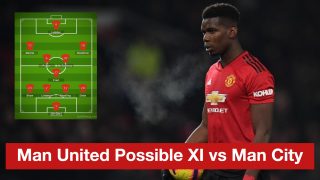 After Sunday’s embarrassing display against Everton, Ole Gunnar Solskjaer should axe several players from the line-up for the Manchester derby.

Just some of the players that haven’t been producing and continue to let the side down.

I don’t think Solskjaer will drop David de Gea, but what on earth is going on? It looks like his mind is elsewhere and the last thing United need now is a goalkeeper performing abysmally.

It would be nice to see an actual right-back play in his preferred role rather than asking our best centre-back, Victor Lindelof, to play out of position. That didn’t fix the problem against Everton and it created another. Diogo Dalot wasn’t great against the Toffees but we’re not lucky enough to have options in that department and should stick with the Portuguese kid between now and the end of the season. Chris Smalling and Luke Shaw will make up the rest of United’s defence.

In midfield, I would go back to Scott McTominay after watching Nemanja Matic’s struggles against Everton. The Serb will get torn asunder by Pep Guardiola’s men and I don’t want to witness such a hammering so soon after Sunday. Fred was unlucky to be pulled off at half-time in the last game and had been playing well up until that point, so the Brazilian should keep his place along with Paul Pogba.

United need to be clinical in attack. We’ve not been scoring at an acceptable rate recently and need to get the lads backfiring. Anthony Martial has looked like a passenger, Marcus Rashford has the look of a player who thinks he’s too good for United, and Romelu Lukaku should see this as an opportunity to become United’s main outlet up front.