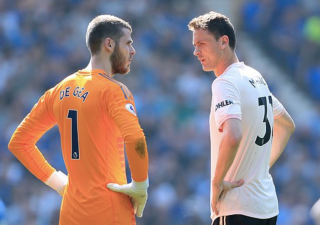 Manchester United were abysmal in their 4-0 defeat to Everton on Sunday afternoon.

The home side netted twice in the first half, thanks to Richarlison and Gylfi Sigurdsson, before Lucas Digne and Theo Walcott sealed the result after the break.

It was United’s sixth defeat in their last eight games and fans are beginning to turn on their underperforming players. And rightly so, to put in that sort of performance at Goodison Park when Champions League football is on the line can only be described as careless and lacklustre.

But, according to the Daily Mail, there was a bit of afters in the dressing room following the match.

The report claims United are a club in ‘meltdown’ as angry teammates took one another on following humiliation against a midtable Premier League side. It adds that the heated exchange meant raised voices ‘could be heard from the corridor outside as they argued among themselves’.

Truth be told, that’s not what fans want to hear before the Manchester derby.

One can only hope Ole Gunnar Solskjaer gave the players a piece of his mind at the weekend. They let everyone down, especially the manager, and this is not the same United side we saw when he first came in.

Looking at the situation as it stems, I just hope this was a typical bickering session and that it doesn’t drag on to create a toxic atmosphere within the club like there was under José Mourinho.