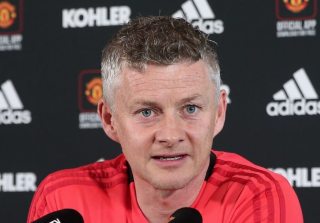 Ole Gunnar Solskjaer insists he is the right man to manage Manchester United, despite suffering six defeats in their last eight games.

There is always a crisis whenever United lose games, but the manner in which they lost against Everton was unacceptable. Ole Gunnar Solskjaer knows there will be difficult days in the rain, though you have to admire his honesty at this morning’s press conference.

It was United’s worst performance under Solskjaer as the players embarrassed both the club and the fans, with Everton winning 4-0.

NEXT: Gareth Bale available on loan after lack of permanent offers; Man Utd should consider no strings attached deal

Solskjaer’s side now face an almighty task this week with two league fixtures against rivals Manchester City and Chelsea.

The boss, who was only made permanent manager less than a month ago, was asked whether he is the right man for the job after United’s recent blip.

“Well I would like to say but it’s not down to me to say that,” Solskjaer said, as per The Independent.

“Of course I’m confident in my team and myself and that I will be ready to take this challenge on. I know it’s a big challenge and that is why I came in when I came in.

“I came in here and I said I’m going to enjoy every single second. I don’t like losing but it’s a great challenge and it’s a challenge that all the managers at this club has had.

“When you go through bad results, you have got to be confident enough to say this is the way we’re going do it and we are planning ahead.

“I’m confident in my team and myself to take this challenge on. It’s a big challenge and when I came in here I said I’m going to enjoy every single second.

“I don’t like losing but it’s a challenge when you go through bad results, this is the way we’re going do it and plan ahead.”

He doesn’t sound afraid of the big decisions he needs to take in the not too distant future.

“I would like to think so, yes,” he said. “I like all these boys, I love them because they are great lads but I’ve got to make a decision.

The big decisions need to happen because people at the club aren’t carrying their weight. While previous managers have failed, the players must shoulder responsibility and now more fingers are being pointed.

Solskjaer cannot afford to have players drag him down and ruin his dream job. He must identify the right players he wants to build a successful team with and get rid of the rest.

This will take longer than one summer but United can still show signs of progression. That’s how Ole will keep fans on side, as long as there aren’t any significant drop-offs or club disharmony.

Obviously, we hope he’s the right man, but only time will tell and fans are the best judgement of that.