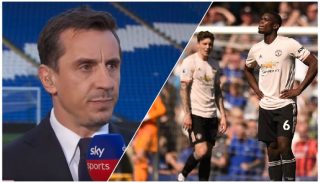 Gary Neville has picked out the six names not delivering what they are capable of for Manchester United.

Speaking on the Gary Neville Podcast, the former United captain expressed little surprise at the club’s poor run of form that saw Everton record their biggest win over the club since 1984. Goals from Richarlison, Sigurdsson, Digne and Walcott sealed the 4-0 win for Marco Silva’s men.

Neville doesn’t hide the fact he fears Solskjaer has some big decisions to make. The Norweigan was only given the managerial role permanently less than a month ago, yet one reporter asked him today if he still feels like the right man for the job.

“I split the problem into three categories in terms of the players,” Neville said, as per Sky Sports. “Some of them just have not got the quality and that’s unfortunate. Some of them will need a kick up the backside and some of them need to go.

“I would think that with every passing week and with every defeat that Manchester United are having, it’s becoming a lot easier for him to make those decisions.”

The Sky Sports pundit had some words of support for certain players.

“Some of them can improve with the right example in the changing room from the experienced leader-type players,” he said. “They can improve and get better. We have seen that with Victor Lindelof this year. He has improved enormously.”

Young was one of the players he specifically defended. The England international has been getting lots of abuse on social media during and after games, but at 33 this is an ageing player still being selected by the United manager. It feels wrong to give him, of all people, stick for that.

“That’s the wrong place to start. Get away from him. Start with the ones who set the influence in the dressing room and have the capability to be the best in the world. That’s where you start.”

But there are six other players more deserving of scrutiny, according to Neville. They include Alexis Sanchez, Marcus Rashford, Romelu Lukaku, Paul Pogba, Anthony Martial and David de Gea.

“They can be the best in their position but all of them at this moment in time are well below the standard.

“Alexis Sanchez, I don’t know what’s happened to him. Marcus, this last couple of weeks has been nowhere near it. I went to both Barcelona games and he just looks off it, he looks like he’s carrying an injury or he’s not quite right, or the season has caught up with him.

“Paul Pogba looks like he is back to the Paul Pogba who was playing under José Mourinho, even though he was outstanding in the first three months.

“Martial has just come back from injury but he’s in that ambling sort of mood again.

“De Gea looks nothing like himself. He looks distracted. You have got contract talks going on with five, six or seven players which is obviously distracting at this moment in time.”

The six players listed by Neville as those who should be performing better are really letting the side down. On paper, this is quite a good United side. Not the type of team that should be losing 4-0 against Everton.

But you’re against it whenever your top players aren’t arsed. They’ve been like that for too long now and now Solskjaer has calls to make.