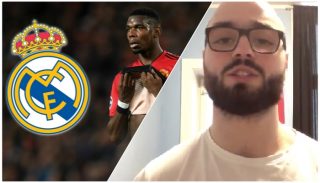 Norwegian sports journalist Jonas Giæver shared a series of videos through the method of a Twitter thread analysing Paul Pogba’s situation, amid speculation over a summer move to Real Madrid.

While none of it will surprise you, it’s interesting how it could make sense for all three parties to come to some sort of agreement in the summer.

The most established football club from Spain probably have their doubts about Pogba, but their newly appointed manager Zinedine Zidane wants the French midfielder, and he will be given the keys to rebuild the current Los Blancos side.

From a United perspective, Giæver weighs up the pros and cons of keeping Pogba at Old Trafford.

For Pogba, however, the Norwegian sportswriter feels a move to the Bernabeu would make total sense.