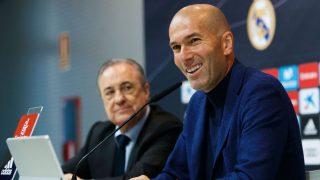 Like Manchester United, Real Madrid have a newly appointed manager who is being made responsible to bring success back to the clubs and given assurances they will be backed to rebuild the teams.

You could say this is a transitional period for both clubs who are recognised as the biggest football establishments in the world. Fans will be hoping their clubs spend big this summer and sign the right players.

According to Don Balon, who we usually laugh off as garbage, Zidane wants to prioritise the signings of Chelsea’s Eden Hazard and United midfielder Paul Pogba. Whether they’ve been told that by a credible source or not, it’s quite believable.

Both Hazard and Pogba have been long linked with moves to Real Madrid and the former recently admitted it would be a “dream” to play for the club.

The pair are up there with the finest players in the Premier League and fit the profile of Galacticos. It would be the typical Real Madrid response after suffering a year on from the sale of Cristiano Ronaldo.

Perhaps it’s telling, or my ill-judged opinion, but I wouldn’t be too fussed if we got a good deal for Pogba. Is he committed long-term for United’s planned rebuild?