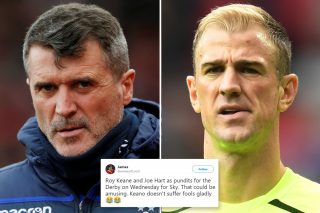 Joe Hart and Roy Keane will be offering their analysis and insight for Sky Sports during their coverage of Wednesday night’s Manchester derby.

The pair will make a decent punditry duet in the studio as Manchester United host rivals Manchester City.

Keane faces a man who he described as arrogant back in 2013.

“Joe Hart is arrogant and making far too many mistakes,” the Cork man said, as per The Mirror.

However, the rivalry on Sunday is deeper.

NEXT: Liverpool star tells Man Utd to do themselves a favour against Man City

You’d have to imagine former City keeper Hart will be rooting for the blues to taste victory in a bid to win the Premier League, while I’m sure Sky Sports will be looking to air Keane’s views on newly appointed United manager Ole Gunnar Solskjaer.

Pep Guardiola’s side have this fixture as their game in hand on Liverpool, who are currently two points clear on top of the league.

But United also need to win the game to keep their top four ambitions alive.