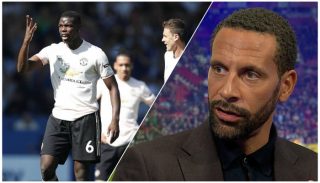 Everyone needs a telling off after Sunday’s shocker against Everton. To suffer such a heavy defeat against a midtable side is unacceptable and the lack of passion shown by the players was truly baffling.

Hopefully, Ole Gunnar Solskjaer sticks to his word after warning some of the players that they won’t survive unless they meet the standards required.

To play for United doesn’t seem like a big deal for some of these lads when you watch them every week. With Champions League football up for grabs, how were they so lacklustre on Sunday?

Rio Ferdinand is one of many who has taken to Twitter to react to United’s 4-0 defeat at Everton. He shared one an inspirational message, seemingly having a go at Solskjaer’s underperforming stars over the weekend.

The former United centre-back wasn’t the only ex-player critical of United yesterday. Gary Neville was fuming after the match on Sky Sports.

Things need to pick up sooner rather than later.