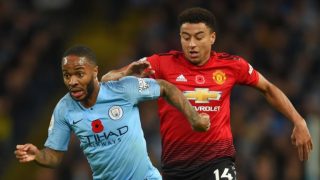 The Reds were ultimately outclassed by Everton on Sunday, losing 4-0 and coming shamefully close to throwing away any hopes of a top-four finish.

Ex-Celtic player and BT Sport pundit Chris Sutton fears it could be worse than the 6-1 defeat suffered against Manchester City in 2011.

Manchester United never turned up yesterday at Goodison Park. The game itself was a walk in the park for Everton, who recorded their biggest win over United since 1984.

Sutton writes a column for the Daily Mail, which reads: “If Manchester United play like this against City, then Pep Guardiola’s side could run up a cricket score. City thumped their rivals 6-1 at Old Trafford in 2011 and it could be even worse on Wednesday night. United were comprehensively beaten by an Everton team who a week earlier were played off the park by relegated Fulham.

“As bad as this was, now is not the time to rush to blame Ole Gunnar Solskjaer. United’s April slump only highlights how much he overachieved after arriving in December. He restored the confidence to a team that had lost all belief under Jose Mourinho. The improvement under Solskjaer masked the club’s shambolic recruitment over the last five years.

“As painful as this hammering by Everton must be for the United fans, it could yet prove to be a blessing in disguise.”

Guardiola’s first trip to Goodison Park with a side that was washed up and wasn’t his. Ole has plenty of time. #mufc pic.twitter.com/hb6ViJym1T

Sunday’s performance was the worst I’ve seen from a United side.

Zero passion, drive and quality. Deservedly beaten by a midtable side.

Man City will make bits of us if we put in the same sort of shift on Wednesday night.

Ole Gunnar Solskjaer will need to warn his players again about what it means to wear the United shirt. Well, what it should mean…