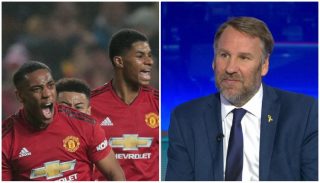 The Manchester derby will take place on Wednesday night, April 24.

A win for Manchester City would make them favourites in this season’s title race featuring Liverpool.

If Manchester United perform as they did on Sunday against Everton, City could easily rack up a cricket score and leave the Reds feeling embarrassed, similar to how they left Goodison Park.

Of course, City would have to get one up on United and many of us would prefer to see them lift the title over Liverpool.

NEXT: Jermaine Jenas urges Man Utd boss to get rid of players with wrong mentality

Former Arsenal player and Sky Sports pundit Paul Merson believes Marcus Rashford’s pace could cause City problems in the derby. That said, he is convinced the Reds will lose a third consecutive match.

Rashy hasn’t scored since the win over Watford in March, so the England international will hope he can put an end to his four-game goal-drought.

Merson believes he is the only player United can count on ahead of the game.

“Marcus Rashford is so quick and we saw how City’s back four didn’t like it when Son ran at them with pace,” Merson said, as per the Daily Star. “Rashford is going to be United’s danger man in the derby. I don’t see how else they can hurt City. They need to get him running at defenders one-on-one.”

Even with Rashford likely to line-up against our rivals, Merson has already written United off in the clash as he reckons City will go the rest of the season without dropping points, which would be enough to see them lift the Premier League for a second year running.

“He might be the only one who can stop them, because I can see City winning every game until the end of the season now. It’s so tight at the top between City and Liverpool that whoever drops any points from now on is probably going to miss out on the championship.”

We can only hope United are involved in title races again soon. Those were the days.