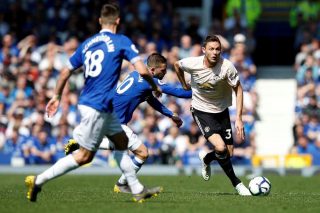 Manchester United’s shocker against Everton is unfortunately fresh in the memory.

We did the exact opposite of bouncing back from the midweek defeat to Barcelona in the Champions League. The Toffees would claim their biggest win against United since 1984, a 4-0 thrashing of Ole Gunnar Solskjaer’s men. Richarlison, Gylfi Sigurdsson, Lucas Digne and Theo Walcott generously chipped in with the goals.

Many feel with the Manchester derby on Wednesday night, against a City side miles ahead of us, our top four hopes are doomed after Sunday’s result.

NEXT: Liverpool star tells Man Utd to do themselves a favour against Man City

It was the worst performance I’d ever seen from a United side. A complete humiliation with none of our players showing a bit of passion.

However, Nemanja Matic says he was the biggest problem (see the tweet below)…

Matic: “Nothing worked for us today. I, who am the most experienced player in the team today, did not play well. We can’t blame the young lads. I was the biggest problem.” #mufc [TV2, @footballqueeen]

Although it was his worst display in a United shirt, Matic was just returning from injury. That’s why, for the second half, I thought it was a strange decision from Solskjaer to replace Fred and not Matic for Scott McTominay.

It’s good to see players take responsibility when their performance hits such a low, but I want more action than words.

We need to sort our sh*t out, lads.