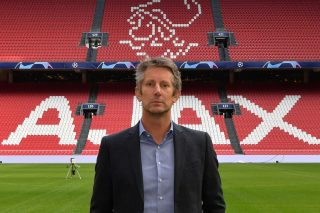 Manchester United face a busy summer of rebuilding the squad after a disappointing campaign which could see the team miss out on a top-four finish.

Former Arsenal midfielder Ray Parlour has urged United to see their sights on Edwin van der Sar, who is currently working as a director at Ajax, everyone’s favourite club left in the Champions League this season (since United were eliminated).

“Well Van der Sar was mentioned,” Parlour said, as per The Express. “He knows exactly how Manchester United runs and what sort of players they need. What a job he’s done. I’m sure they’ll be looking at a few Ajax players maybe. Sometimes, when you bring in people like Van der Sar, who’s got experience, the young players at Ajax might look up to Van der Sar.”

NEXT: Man Utd star too distraught to conduct interview after shocking Everton defeat

The director of football appointment needs to be a long-term decision, whereas the current Ajax team is likely to be stripped apart after this year’s run in Europe. They’ve knocked both Real Madrid and Juventus out of the Champions League and will now face Tottenham in the semi-finals.

Parlour is of the view Van der Sar’s appointment could help the club bring some of Ajax’s hottest prospects to Old Trafford in the summer.

“That could be a massive plus point if you did get someone like that. They know they can trust him, they know what he’s going to say to them about what the club’s all about, and maybe that’s where they go. That might be the angle they go for.”

It’s crucial for Solskjaer that the club has the right structure in place. While Louis van Gaal and José Mourinho failed in their jobs, I don’t think either manager would have positive things to say about the running of United.

Moreover, it’s not going to be a quick process.