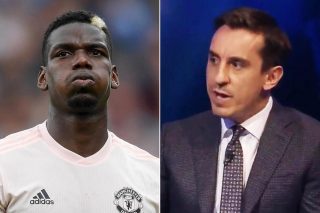 Paul Pogba is back putting in poor displays for Manchester United. It was only a matter of time before Ole Gunnar Solskjaer had the Frenchman to deal with.

It’s a huge problem when your star player is inconsistent or plays as if there’s something else on his mind. We know Real Madrid are keeping close tabs on the 26-year-old, so Gary Neville has urged Pogba to give the club more clarity on his future.

Pogba is capable of great things on a football pitch, but we don’t see enough of that. The press had us believe José Mourinho was the reason for Pogba’s supposed dip in form, though that can no longer be the reason for his shortcomings with Ole Gunnar Solskjer now at the wheel, a coach the France international seemingly has a lot of time for.

“Paul Pogba has got the capability of carrying Manchester United through this wilderness and I agree can build a team around him, Rashford, De Gea,” Neville said, as quoted by The Sun. “What Paul Pogba has to decide is give the club clarity on whether he wants to be that player that will get Manchester United back to the top again, because he has the capability, he has the ability to do it.”

NEXT: Man Utd star too distraught to conduct interview after shocking Everton defeat

This comes after Pogba publicly admitted it would be a ‘dream’ to play for Real Madrid. It didn’t sound like a footballer focused at his current club, and his performances show that.

“He’s the one player in the squad that I would say actually is world class. I do believe he can play on the world stage. I don’t think he played very well against Barcelona or against Paris Saint-Germain in the first game, but he looks distracted a little bit. His agent is always hinting about getting away, the rumours of Barcelona and Real Madrid are there, they’re real. He needs to give the club clarity.”

But surely, if Barca or Madrid are paying any attention to Pogba lately, they would be spending money elsewhere, more wisely?

Pogba has not become the player we hoped he would. Not for United on a consistent level.

“The club need clarity whether Paul Pogba is going to carry Manchester United through this difficult period with Ole Gunnar Solskjaer in this next three years and be at the forefront of it, or whether he’s going to jump ship, go somewhere else. There’s no problem with that. Do it quickly Paul so the club can move on.”