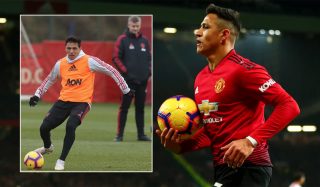 Ole Gunnar Solskjaer insists Manchester United players need to step their game up in order to stay at the club beyond this summer.

Alexis Sanchez returned to action on Tuesday night against his former club Barcelona, but it was too late in the tie for him to turn the game in United’s favour. He had missed the last four Premier League matches due to an injury sustained in last month’s win over Southampton.

NEXT: Man Utd squad vs Everton: No Mason Greenwood, but Solskjaer promises to show faith in youngster

Speaking to the media, Solskjaer made it clear that a rebuilding process is inevitable and issued a warning to the squad.

“As a club we cannot carry players,” Solskjaer stressed, as per The Telegraph. “Everyone has to take ownership, keep improving, show that hunger that you want to get better individually and as a team. I’m not just talking about Alexis. Everyone is under the same demands. But if we are talking about Alexis, he hasn’t been lucky with injuries.”

Sanchez joined United last January and has been a flop ever since. This season he has netted just two goals whilst adding a further four assists across all competitions.

But for a player with his salary, a lot more should be expected.

The boss made it clear that he’s still backing Sanchez to shine.

“Since I came in, he’s had two long-term injuries and that hasn’t been beneficial to him. Some other players have had injuries as well. But I see the characters we have. I am looking at who we should keep, who we should move on. Alexis has got a fantastic talent when he’s at his best level. Now we want him performing for us.”

It’s important to keep the players on their toes and for them to realise the job at hand.

However, the issue with Sanchez is we’ve been here before with him, with the manager trying to encourage him back into form.

He no longer seems capable of playing the way he did some years ago for Arsenal. A real fear Sanchez is past it.