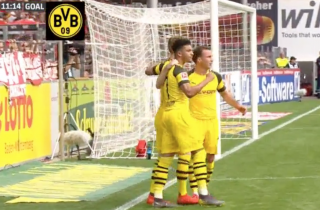 It was the sort of day no Manchester United fans will want to remember any time soon.

Everton recorded their biggest win over United since 1984 and Ole Gunnar Solskjaer issued an apology to fans after being beaten 4-0 at Goodison Park.

The Norwegian knows that sort of result is unacceptable at this club – from both a player and manager’s perspective – and he now needs to find a way to fix this mess.

As the manager, Solskjaer must look to rebuild this United side and make it his own.

The Independent have recently claimed Jadon Sancho is seen as a prime transfer target for United this summer, potentially arriving to replace Alexis Sanchez.

And, while United were getting hammered by the Toffees, Sancho scored again for Borussia Dortmund, taking his Bundesliga tally to 11 for the season, as per WhoScored.

Watch the Sancho goal below as the young England international breaks into the box and showing his ability to finish.

We can only hope it’s not too long before we have a player capable of doing this on the right flank. It’s not as if Anthony Martial is doing it on the opposite side since getting his new deal.