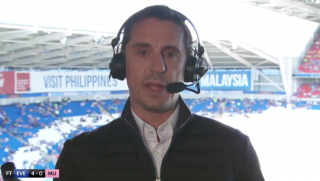 Gary Neville was furious on Sky Sports after Manchester United’s disappointing 4-0 defeat at the hands of Everton in the Premier League.

It was one of the worst performances I have ever seen put in by a United side as Everton recorded their biggest win over us since October 1984.

None of the players looked up for a fight and even after going behind there was no leadership.

Perhaps this is what Ole Gunnar Solskjaer needed to see. Everyone knows he has an almighty job on his hands and nobody wants to see him fail like David Moyes, Louis van Gaal and Jose Mourinho have done previously.

Neville gave a passionate assessment of United’s situation on Sky Sports and questioned who at the club would be helping Solskjaer rebuild this side. It’s something the former club captain has been asking for quite some time.

“I’m furious, to be honest with you,” Neville said on Sky Sports.

Watch the full clip below.

😡 – “I’m furious, to be honest with you.”@GNev2 says @ManUtd‘s performance today was “embarrassing” and compares the work-rate to that of @LFC and @ManCity.