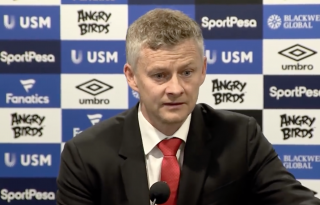 Manchester United suffered their biggest humiliation in recent memory with a 4-0 defeat to Everton at Goodison Park.

Ole Gunnar Solskjaer’s side were completely outfought and outthought against Marco Silva’s side, conceding two goals either side of half time.

Goals from Richarlison and Gylfi Sigurdsson gave the home side a convincing two goal cushion at the break, which was doubled through second-half strikes from Lucas Digne and Theo Walcott.

The defeat means United have lost all of their last five away games, but this one will no doubt hurt the most for Solskjaer, whose side have been a shadow of the team they were before the Norwegian was appointed on a permanent basis.

“From the first whistle everything went wrong. I just want to apologise to the fans. They’re the only people with the badge on today who can hold their head high because we can’t,” Solskjaer told Sky Sports via the BBC.

“Everton were better than us at all the basics. There are so many things that we need to do better to get a result. Talent has never been enough.

“We just didn’t perform. That was not worthy of a Manchester United team. We hold our hands up and apologise to everyone associated with the club. We have a perfect chance to make amends on Wednesday.”

Solskjaer added: “We’re way off where we want to be.”

“When you lose in the league like we did here, everyone sees that we have a big job to do.

“This club has been down before, we’ve just got to pick ourselves up. It might not happen overnight, but it’s going to happen.

“You want to see the team express themselves. The goals were easy, we were sloppy on the ball. We cannot hide, we just have to step up and say we have to improve.

“We have to win all four games, then we might have a chance [of finishing in the top four]. It’s a big ask, but we can do it. We can’t just talk about it, we’ve got to do it.”

NEXT: Video: Gary Nevillle furious with Man Utd players after worst defeat against Everton since 1984

Solskjaer now has the unenviable task up picking his side up for the Manchester derby on Wednesday, with their opponents pushing for the league title. United’s top four hopes all but evaporated in the Goodison Park sun, in what was a must-win game for Champions League qualification.

Looking ahead, United must change drastically from top to bottom this summer, with the club way off on all fronts at present. A director of football must be immediately prioritised for United as well as a complete squad overhaul with a significant investment if Solskjaer’s side are to have any chance of competing next year.