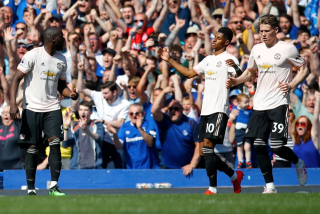 The Reds were humiliated at Goodison Park, conceding four times after were unable to score one of their own, with Ole Gunnar Solskjaer issuing an apology to fans after the match.

It was a day to forget. A nightmare from start to finish, but Solksjaer must get the group he wants together and build for the future (and he might want Jadon Sancho to help with that).

NEXT: Video: Gary Neville furious with Man Utd players after worst defeat against Everton since 1984

I would go as far as to say I don’t recall many performances that were worse than what United showed today. Utterly shite.

It was so bad McTominay seemed too distraught to even speak after the game, according to a tweet from journalist Tyrone Marshall.

Asked Scott McTominay for a word on his way out past the mixed zone. “No, I just can’t” he said with a pained expression that suggested he never wanted to speak about that again. One of the few (only?) players to escape with any credit from that humiliation #mufc

Marshall says McTominay refused any questions and gave the impression he didn’t want to speak about the game again.

Every player in the dressing room needs to have a good long look at themselves.