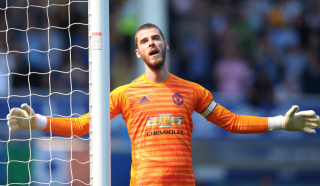 Manchester United have reached an unwanted milestone for their troubles this season.

NEXT: (Watch) Sigurdsson doubles Everton’s lead from distance but De Gea must do better

According to @OptaJoe, last time we conceded more (47) in one season came in 1989-90 and I wouldn’t bet against us surpassing that figure before this campaign comes to an end.

46 – Manchester United have conceded 46 league goals this season, their most ever in a Premier League campaign, last conceding more in 1989-90 (47). Submissive. #EVEMUN pic.twitter.com/md5nQ1TpZT

Our biggest problem this season has been defending but David de Gea’s goalkeeping hasn’t met the extremely high standards he set himself.

His positioning for Sigurdsson’s goal was awful, but the same could be said about the defending for Richarlison’s acrobatic opener.