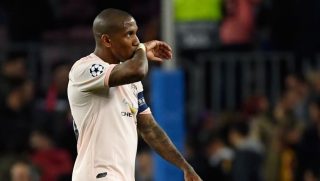 Ashley Young has been dropped to the bench for Manchester United’s trip to Goodison Park.

Some fans have become frustrated with the England international starting games and looking past it, but this a 33-year-old footballer coming to the end of his career, especially playing at the highest level.

Whether he deserved a new deal is a discussion for another day, but Youngy has been a good servant to United down the years. I find the lack of respect towards him baffling.

Anyhow, Ole Gunnar Solskjaer named his starting eleven to face Everton today and fans have had their say on it via Twitter.

Young’s exclusion got a lot of positive attention.

Tears in my eyes. Ashley Young is on the bench. Ole deserves a new contract just for that decision.

When you realise Young is being rested for the City game pic.twitter.com/GAQUpZZvZz

Finally Young is benched….All the best bring 3pts back at home

however seeing Lindelof RB and Lukaku leading the team pic.twitter.com/xGB3A0Pt8l