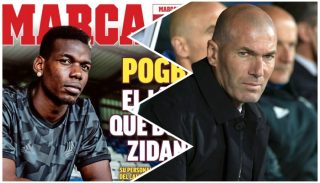 Real Madrid have done nothing to hide their admiration for Manchester United midfielder Paul Pogba. Zinedine Zidane publicly stated that he would like to work with the midfielder and the player himself admitted it would be a ‘dream’ to wear the Los Blancos shirt.

The Spanish press did their best to wiggle in questions about Pogba during the week when United were in Barcelona for their Champions League quarter-final second leg, which finished with the Catalan side progressing.

Ole Gunnar Solskjaer doesn’t seem concerned about the issue right now and may just want to focus on the job at hand, which is to qualify for the Champions League next season by finishing in the top four.

The cover of MARCA today reads: Pogba, the leader Zidane is looking for.

Zidane can have him if he’s desperate. £200m should do and when times are hard he will see how much of a ‘leader’ he is.

Marca big up his virtues as a leader, his record the ability he possesses. It reads as though Real Madrid are lacking leaders and should look to Pogba as a fix, though those who watch United regularly will tell you he’s not much of a leader.

Not on the pitch anyway.