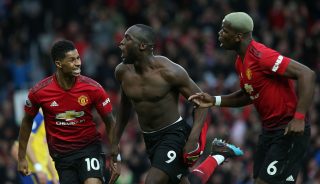 It seems like the Belgian’s days at Old Trafford could be numbered, as the Telegraph are reporting that the club are willing to listen to offers for the player. They also note that Lukaku is open to the idea of moving on after spending just two seasons with United.

Interest from Bayern and PSG comes from the same story, which states that Inter Milan are also believed to be eyeing up the Belgium international.

NEXT: Phillipe Coutinho speaks out on controversial goal celebration against Man Utd

The 25-year-old has 25 goals to his name in 42 games across all competitions this season. That doesn’t quite compare to his 27 of last season…

Leaving United could see Lukaku find a team that suits his playing style more because under Solskjaer he has looked out of place at times, but that didn’t stop him showing up in Paris when United knocked PSG out of Europe in March.

It could also grant United the opportunity to sign a striker who will suit Solskjaer’s game. We’ve seen in recent weeks how unreliable our forward players can be as a collective.