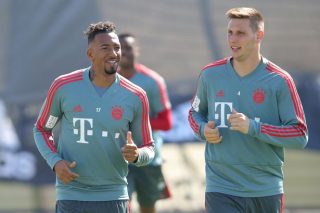 Manchester United are still searching for a new centre-back and have made a fresh enquiry about signing Bayern Munich defender Niklas Sule, according to reports in Germany.

The Reds were knocked out of the Champions League by Barcelona, losing 4-0 on aggregate over two legs, and Ole Gunnar Solskjaer made it clear in the aftermath that he would sign players and build his own side.

The defence has been the biggest concern at United for some time and we still see Phil Jones and Chris Smalling start games alongside one another. Ashley Young at full-back and a bunch of other defenders made of paper.

NEXT: Man Utd will listen to offers for key player; Bayern Munich and PSG emerge as potential suitors

In hindsight, the only central defender at United who had a decent season has been Victor Lindelof, who should be in contention to win Manchester United Player of The Year. Luke Shaw is another worthy shout for the award.

According to Sport1 in Germany, United have been scouting 23-year-old Bayern Munich defender Sule. The Bundesliga champions don’t want to lose him, however, a bid in excess of £40 million should be enough to test the waters.

Sule joins a long list of defenders linked with a summer move to United. The likes of Toby Alderweireld, Raphael Varane and Kalidou Koulibaly are all possibilities and could end the team’s defensive complacency.

But while the defence should be Solskjaer’s biggest concern this summer, the midfield needs addressing too, as does the right flank.