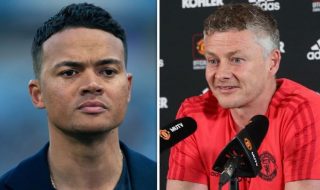 Former Tottenham midfielder Jermaine Jenas has voiced his views on Ole Gunnar Solskjaer getting the job Manchester United job permanently. Something he doesn’t feel the Norwegian is worthy of.

Results haven’t been great since Solskjaer was officially confirmed manager, but he has still got us into a position where finishing in a Champions League spot is possible. That didn’t seem to be the case in December when José Mourinho was in charge.

A win this weekend over Everton will shut a few people up, though the Reds must be ready for two more difficult league meetings next week. United take on Manchester City on Wednesday night and Chelsea the following Sunday.

Jenas was asked on BBC Radio 5 if he feels the appointment was the right decision, as quoted by Goal.com: “No. I felt it was an emotional decision and in any business, it should be a thought-out logical decision for the long term.

“One of the things they need to get away from is ‘the Manchester United way’ and ‘that’s not the way they used to do it.’ What Sir Alex Ferguson did was very unique and United have found it very difficult to replicate with some of the best managers in the world.

NEXT: Phillipe Coutinho speaks out on controversial goal celebration against Man Utd

“Pep Guardiola going to Manchester City didn’t say ‘what did Mancini and Pellegrini do to win the league?’ He came in and did what he wanted t do. Jurgen Klopp did that at Liverpool, he had his own style. That’s what United need, I don’t think they need to try and find someone who can get close to what Ferguson has done, they need to find [a new identity].”

We couldn’t help but pull up a tweet from Jenas signing from a slightly different hymn sheet.

First time Man Utd have scored 5 goals in one game, since the days of Sir Alex Ferguson! Brilliant from solskjaer! Man Utd sign him up on that long term contract right now!!!!👀

“Mourinho tried to do that but the club didn’t buy into it”, Jenas added.“I don’t think they know what they’re doing.”

There are a few former pros becoming more critical of Solskjaer in recent weeks. Of course, performances and results haven’t helped, but it seems like they’re enjoy weighing up the worst outcomes.

Solskjaer was never going to get it easy as United manager. Every little thing is picked up on and receives 10 times as much attention.