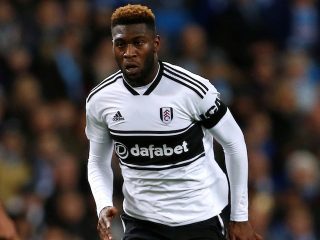 Fosu-Mensah sustained the injury in one of Fulham’s rare victories this season, last week’s 2-0 win over Everton at Craven Cottage.

Manchester United issued a short statement on their website on the player’s return, which read:
‘Everyone at the club wishes Tim well with his recovery.’

The Dutchman has made just 13 appearances for the relegated side this season, where he has failed to nail down a first-team place under any of Fulham’s three managers.

NEXT: Scott Mctominay told he will not be leaving Man Utd this summer

This is Fosu-Mensah’s second full season out on loan in the Premier League, after making 24 appearances for Crystal Palace the previous season.

The signing of Diogo Dalot and other expected arrivals this summer means it is looking increasingly difficult for Fosu-Mensah to break into Ole Gunnar Solskajer’s first-team set up when he does regain fitness.

Fosu-Mensah has failed to truly impress in either of his loan spells despite showing his potential at Old Trafford under Louis Van Gaal. The Dutchman, 21, may have to look elsewhere if he set to progress in his career following injury rehabilitation.