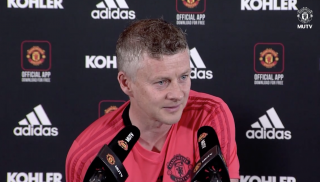 The Manchester United squad were given a warning from their manager this afternoon.

Ole Gunnar Solskjaer addressed the media at his press conference and issued his most withering assessment of his squad yet when admitting some players need a ‘reality check’.

NEXT: Marco Silva warns Everton will make it difficult for Man Utd

It’s no secret that this United side doesn’t cut the mustard. We may have played well in games under Solskjaer, but the players still struggle to do it most weeks.

United are reportedly looking to bring in 5 new signings this summer, as per ESPN, and the club is also expected to bid farewell to a number of players.

The Reds have lost seven games since Solskjaer was made permanent manager last month, during a period which saw them knocked out of both the FA Cup and Champions League.

Solskjaer’s men can still finish in the top-four making Sunday’s clash with Everton more important. Then, in the following week, United take on Manchester City and Chelsea in the league.

Solskjaer said, as quoted by the Evening Standard: “I’ve learnt a lot about them over the months here now and you get to know them.

“Most of them have really impressed in their attitude and some need to get a reality check of where they’re at – but most of them know they can improve if they keep working as they do.

“Every day in training, every game when you’re playing, there’s no hiding place and everyone can see what your level is at.

“We’re working with a fantastic staff to create this culture. We want players to take ownership of what’s happening here as well, but the performance on the pitch will determine where they’re at.

“That’s what we spoke about at Barcelona – when you’re at big stadiums, you’ve got to step up, make good decisions and I’m looking forward to this period.”

Jose Mourinho also felt his players at United needed a reality check. Hopefully, Solskjaer gets a better reaction from this group of players.

We’ve hit a dry spell of late with questionable results, though two of those recent defeats came against Barcelona. That shouldn’t be overlooked.